A proposed law is turning the world of smartphones and tablets upside down in Europe. Ecodesign will become the new standard, ensuring that devices are more energy and resource efficient, have a longer lifespan and are easier to repair.

Smartphones and tablets in Europe have to become more sustainable. To achieve this, the European Commission (EC) is preparing a legislative proposal that may come into effect this year. The proposed law is part of the European Ecodesign Directive: Ecodesign for Sustainable Products Regulation (ESPR). The new law adds smartphones, cordless phones and tablets to the 10 categories of products for which these rules have already been in place since 2009. At its core, the goal is that designs for smartphones and tablets will be more energy efficient and have a longer lifespan. On the one hand, by requiring manufacturers to support the devices longer with updates. On the other, by making it easier to repair the devices. At the end of their lifespan, they should also be easier to recycle.

More and more smartphones and tablets

The reason cited by the EC for the new bill is the growing demand for smartphones and tablets and the consequent growing energy demand and environmental impact of the raw materials needed to produce these devices. Adding to this is the fact that smartphones and tablets can be used for much longer than the current average of two to three years. The Commission is concerned with using raw materials more efficiently, preventing unnecessary premature replacement and achieving better repairability and reusability. A greater reliability of the products and 15 key components such as batteries, screens, cameras and microphones are also points of attention.

With the new law, the EC aims to achieve a 33% savings in the primary energy consumption of the devices. All smartphones, cell phones, wireless phones and tablets in Europe combined used 39.5 TWh (terawatt hours) of energy over their lifetime in 2020, including the energy needed to manufacture these devices outside the EU. That should decrease to a level of 25.4 TWh by 2030, the proposal says. 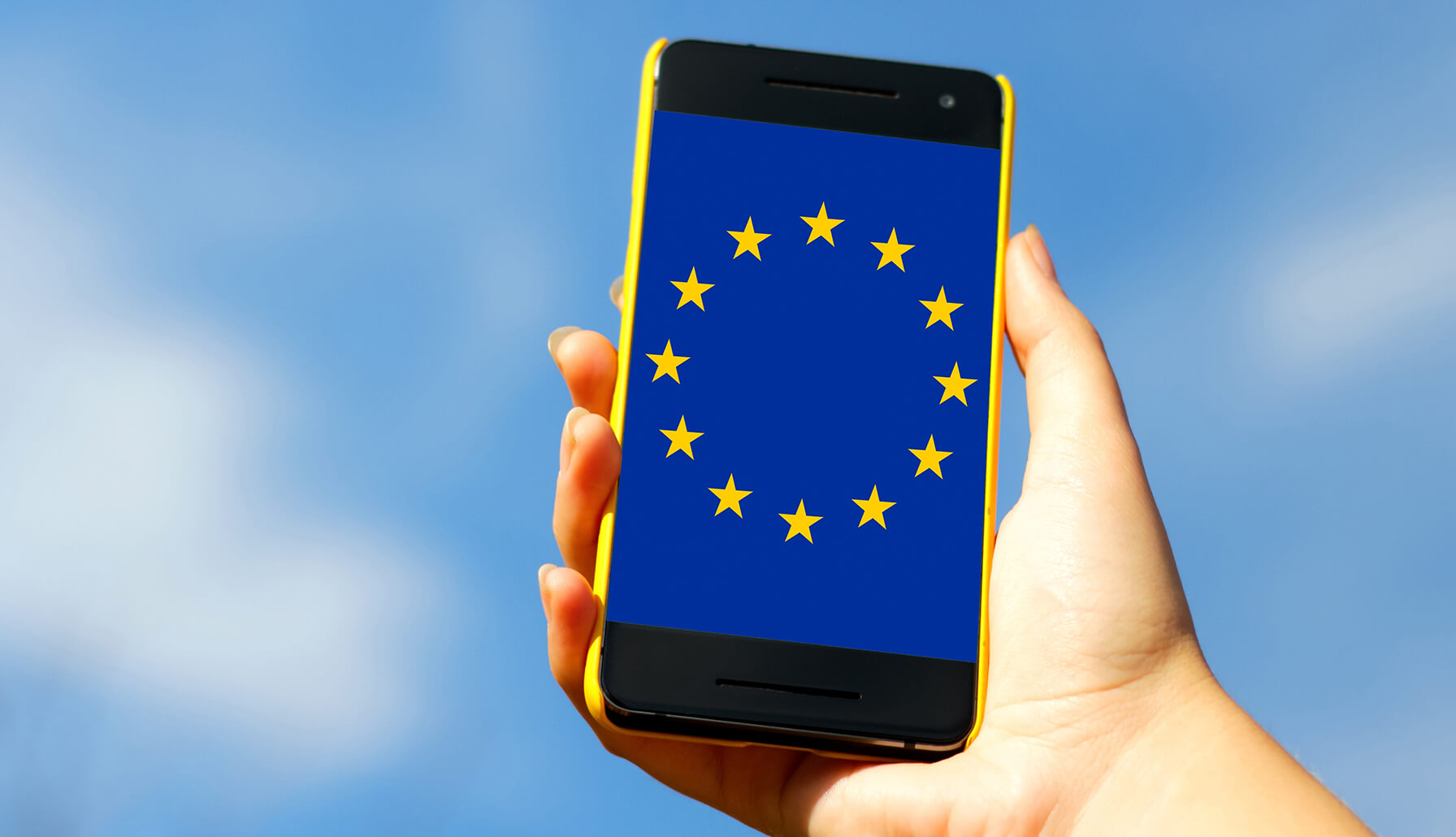 The term used by the EC is “ecodesign”. This means that devices must be designed in such a way that:

Furthermore, manufacturers must guarantee that updates for operating system will remain available for three years after a device is no longer sold. For security updates that availability must be five years. Upgrades must also no longer result in deteriorating performances of devices. Twelve months after the law takes effect, manufacturers of smartphones and tablets sold in Europe must comply with the new rules. Excluded from these new rules are phones and tablets with flexible, rollable screens and smartphones designed for high security communication. 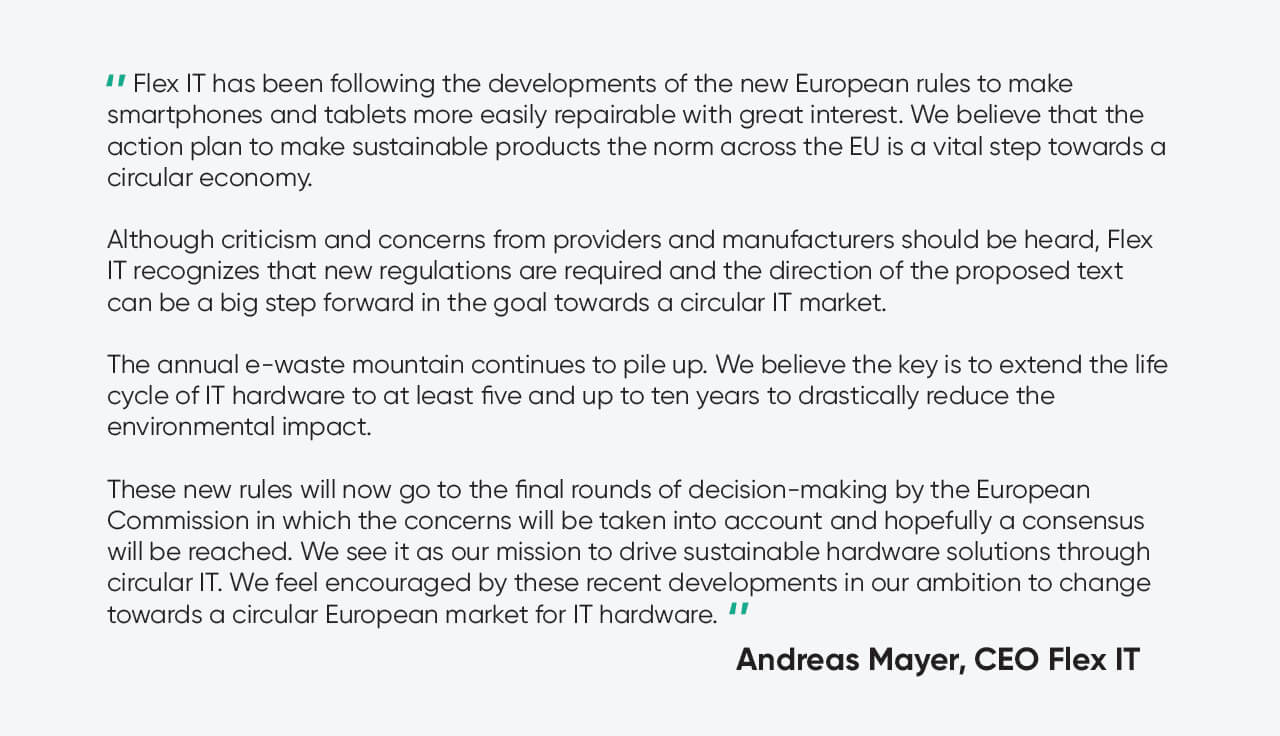 Far-reaching consequences for the industry

If passed, the new law will have far-reaching implications for manufacturers and importers of smartphones and tablets. Many manufacturers will have to redesign their products and business model to comply with the rules. That includes stopping gluing on parts and making their devices dismountable and repairable. They are also required to make a wide range of spare parts available to the public quickly, and at reasonable prices. In addition, they will have to start providing operating system and security updates for much longer than is common today. The reliability and robustness of devices must also improve, because even without a cover or case, devices should not be damaged by falls, dust or water. All these interventions should not lead to a large increase in the cost of the devices.

Criticism of ESPR is not off the table

In general, the EC’s ecodesign plans have received positive feedback. Industry representatives however, voice their concerns about the proposed regulations to make smartphones more sustainable, repairable and circular. Manufacturers such as Apple, Samsung, Google and Huawei argue that the proposal will lead to higher prices and an increase of e-waste due to overproduction of spare parts.

The Information Technology Industry Council (ITI) reminds the EC that ecodesign proposals should be balanced, realistic and not unnecessarily burden the industry. Regarding the obligation on manufacturers to provide spare parts, the ITI wants to specifically focus on the parts that fail most often. The industry also wants more time to deliver the parts, i.e., longer than the proposed five business days. The requirement that phones be more resistant to fall damage, dust and water should be modified to reflect “realistic conditions of use”. Users having the ability to restore the operating system is also not to the ITI’s liking. According to the ITI, this creates vulnerabilities and risk of data loss with no obvious positive environmental impact. The ITI also would like the industry to have 24 months rather than 12 to comply with the new rules.

DIGITALEUROPE, the European digital industry association (formerly EICTA) also thinks the ESPR proposals for smartphones and tablets go too far. The association in which manufacturers such as Apple, Samsung and Huawei are represented published a position paper in which they argue that security updates for three years and functional updates for two years are sufficient. When it comes to spare parts, DIGITALEUROPE does not want to go beyond screens and batteries. Components such as cameras, microphones, speakers and connectors should be omitted from the obligation since they rarely break down. Deutsche Telecom questioned that the rules will only apply to new phones and that it is unclear what it will mean for refurbished models. The telecom provider further believes it is unrealistic that manufacturers will be required to implement updates within four months. 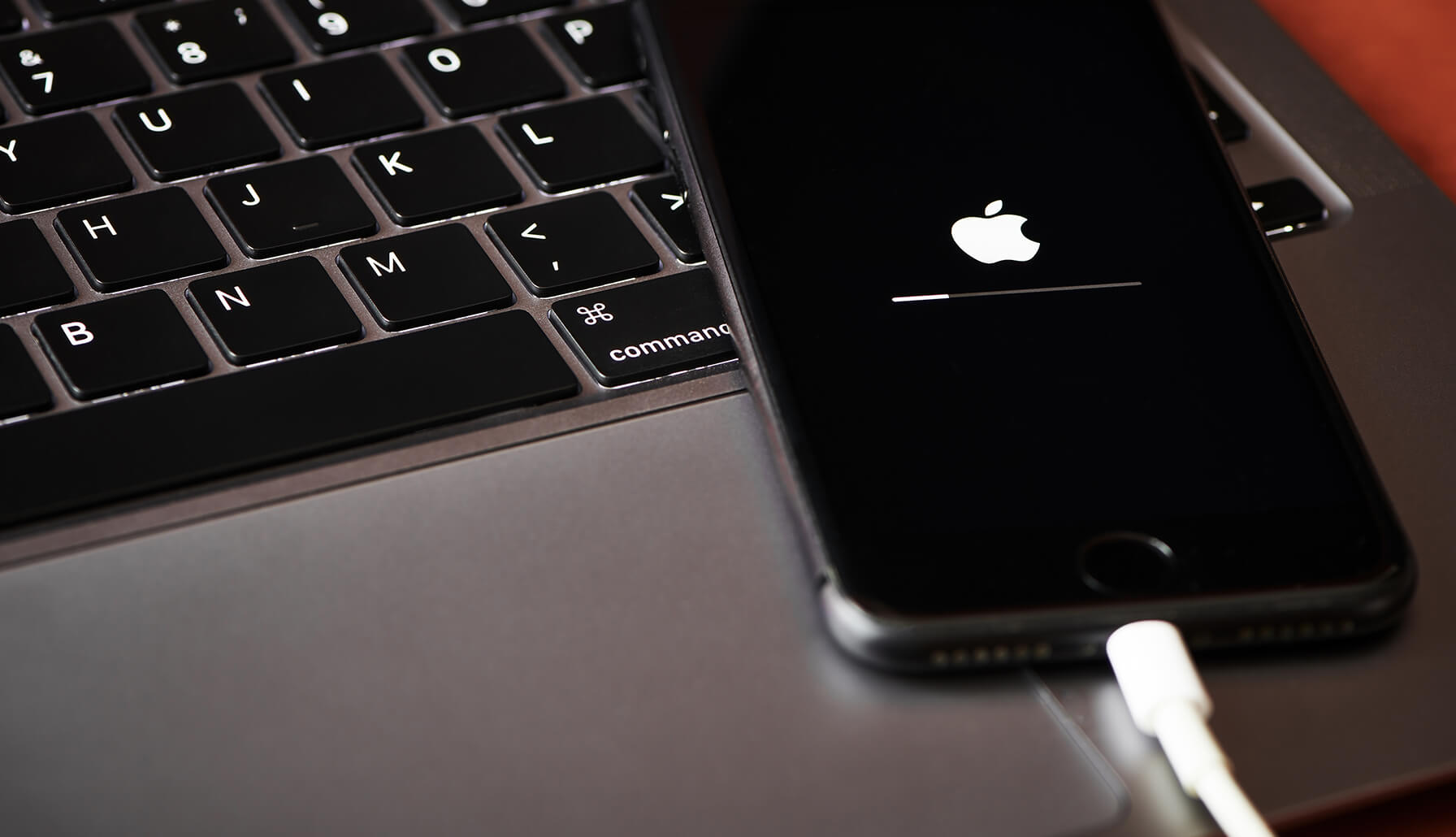 The U.S. Consumer Technology Association (CTA) worries that the new rules could do more harm than good. The CTA, which represents 1,500 technology companies, fears that implementing major design changes in consumer electronics will be too much for the industry. Especially taking in account the already existing pressure on supply chains. They see no point in developing separate devices for the European part of the global market. According to the CTA, the EC proposals are crippling for:

Criticism has also emerged from parties who feel the EC’s proposals are not ambitious enough. There is the Coolproducts campaign, which is pushing for ambitious minimum energy efficiency and environmental requirements for products sold in Europe. Coolproducts believes there can no longer be any room for self-regulation by the industry, as, in their eyes, it has achieved virtually nothing in the past. They propose that manufacturers provide 6 to 7 years of spare parts after a device is taken off the market. In addition, Coolproducts wants 5 years of operating system support.

There is a good chance that the European Commission will make the proposal law despite opposition from within the industry. The EU’s Ecodesign initiative dates back to 2008, and air conditioners, kitchen appliances, power tools and refrigerators, among others, preceded smartphones and tablets. The new law will start to significantly improve the energy efficiency and lifespan of these devices, whilst reducing the mountain of e-waste. The environment and consumers will certainly benefit from this circular breakthrough.